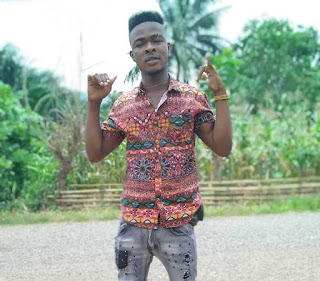 The young talented singer and rapper, James Kwame , popularly known in the showbiz YAWAH, saying that the newly released track of Jemmy Flex titled “WOMANIZER” was stolen from him.
According to the “WOFOANU” hit maker (YAWAH) he paid unknown engineer for a beat some month ago to use for his unreleased track titled “WOMANIZER”  which he featured three other artists GABRI-K, ACHIE, and JEMMY FLEX. YAWAH said they were even planning to shoot video clip on the track for Ghanaians to know they have much talented young people from Volta Region. According to YAWAH two of them in addition to him were living in Accra whilst Jemmy flex living at Volta. Due to that, they decided to send the instrumental for the track to Jemmy Flex ‘s producer so she can record her part and send to them back.
YAWAH also said the girl was delaying to record her part and send, just for him to know she was in school. The girl later went to her producer to recorded her part which was sent to Gbri-k , that he does not even listened to as the project owner. He later noted a date for the rest of them so they can record their part too for the track to be released. But due to scarcity of time they could not recorded their parts but still hoping and scheduling time for that.
Just a few day ago Jemmy Flex released a new single titled “WOMANIZER” which is already hitting the street and radio station and YAWAH claiming to be the original owner of the track. He said that because, according to him the beat, the title of the song and even the chorus Jemmy Flex used was the same as his own which the Jemmy Flex was featured on. The most annoying part is that Jemmy Flex even used some few lyrics of Gabri-k which was sent to her so she can follow and record her part to them. YAWAH therefore advice all the artists in Ghana to know the kind of people they featured on their song, if not they will be stealing their stuffs. This is what YAWAH send to Jemmy flex “dont betray me but stealing my works but rather come to me to teach you how to work. But If u don’t let me tell u Hight Chief Dah YAWAH is not a guy name”

CHECK THIS OUT  Wahala be like bicycle!! James brown shows of his gigantic ikebe in new photos