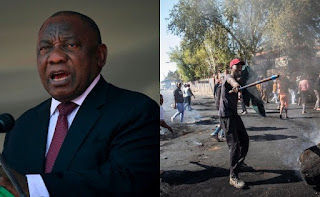 President Cyril Ramaphosa of South Africa sent a special envoy composed of three officials to about seven African countries after he was booed at the funeral of former Zimbabwean President Robert Mugabe in Harare on Saturday, September 14.

The special envoy formed by former Minister Jeff Radebe, Ambassador Kingsley Mmabolo and Khulu Mbatha, a veteran leader of the ruling African National Congress will visit Nigeria, Niger, Ghana, Senegal, Tanzania,
the Democratic Republic of the Congo and Zambia to convey a message of solidarity and also inform the government of each country about the steps that South Africa is taking to end the xenophobic attacks.
“The special envoys will inform the governments of the African countries identified about the steps that the South African government is taking to stop the attacks and hold those responsible accountable,” reads the statement of the presidency of South Africa.
Remember that the South African president was booed when he addressed the mourners at the funeral of the state of Robert Mugabe at the National Sports Stadium in Harare, the capital of Zimbabwe.
He apologized on behalf of the South Africans, but the angry Zimbabweans told him that an apology is not enough. Zimbabweans told him that they want their government to arrest those responsible for the attack and guarantee the protection of their foreign citizens.