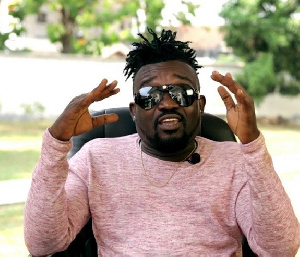 CEO of Rufftown Records, Bullet, has stated that singer Fantana misunderstood his ‘true Rufftown family’ comment on Instagram.
According to him, his post was not an attempt to suggest that his signee Fantana is being cut off from the label.
The artiste manager had taken to Instagram to announce something big was going to happen at his label. He tagged three artistes, including Wendy Shay, labelling them as the true Rufftown family.
Fantana whose name was omitted did not take it lightly.
She called out Bullet and Wendy Shay on Instagram alleging that they bully and torture her. She added that she is the one who wants to leave the label but the post suggests otherwise.

CHECK THIS OUT  Gist: see what happens as Nigeria lady dump her boyfriend in club and end up in hotel room with Bella shrumda (watch video)

In an interview with Zionfelix, Bullet said Fantana rushed to conclusions by thinking the label wants her out.
He further stated that an organised company like his would not take to social media to announce a contract termination when nothing of the sort has been discussed.
He revealed that the tag ‘The true Rufftown family’ is a movement he has started aimed at pairing his female acts with two male acts on the label.
The trio, he said, would work on a song together and put it out as a Rufftown family initiative while promoting their brand.
Bullet added that he felt closing such a deal with his artistes was a good thing to hint on to his followers on social media.

The artiste manager further revealed that he would have subsequently announced the next trio which included Fantana after the discussions on that end was done with.
The true Rufftown family does not mean that Fantana is an exception nor is she being bullied, he added.
He stated that the misunderstanding stemmed from the fact that he was dealing directly with the management and she was unaware of the project.
Wendy Shay also in an interview also denied bullying her label mate Fantana. She said that as an individual who has been at the receiving end of cyberbullying she would not take delight in bullying another person.

CHECK THIS OUT  MUSIC:WIZKID "Made in Lagos" Album