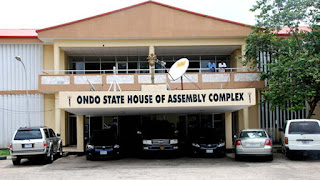 Snakes chase away Ondo lawmakers during plenary By Bola Ojuola, Akure |  TwitterFacebookWhatsAppTelegram There was pandemonium at the Ondo State House of Assembly complex on Thursday as snakes fell from the roof of the Assembly while lawmakers were holding plenary, sending them out of their seats. The snakes were said to have suddenly appeared during the plenary at the centre of the Speaker’s seat, thus forcing the lawmakers to scamper to safety, just as proceedings were also disrupted. ADVERTISEMENT However, efforts by the lawmakers to kill the snakes proved abortive as the snakes reportedly escaped. ADVERTISEMENT A witness who is a staff of the Assembly said that due to the deplorable condition of facilities at the complex, snakes freely enter lawmakers’ offices and the hallow chamber. He said on Wednesday afternoon, a snake entered one of the offices, causing mild drama and apprehension at the Assembly complex when it pursued a lawmaker out of his office. “Today, three snakes fell from the Chamber’s roof when the sitting is about to commence and this made all the lawmakers to run for their lives. “One of the snakes dropped in front of the Speaker; the snakes escaped from the scene, some of the lawmakers were shaking as if they want to die”, the witness narrated. As a result of this, legislative activities have been suspended in the Assembly until the complex is renovated, our reporter gathered.